While looking for Dutch New York sources on newspapers.com, I’ve noticed a whole lot of Dutch jokes appearing in newspapers in Vermont in the 1820s through 1850s.

There are a few reasons why I suppose this is the case. Vermont borders the Hudson Valley and so many Vermonters had crossed into New York State to encounter some funny old curmudgeon Dutchmen from time to time. Also, Vermont was a literate state, full of Yankees and newspapers. The publication of Diedrich Knickerbocker’s (Washington Irving’s) History of New York in 1809 also made the old-fashioned New York Dutch into a popular source of New England comedy. Finally, there may also be a selection bias effect at work here, as more newspapers from early Vermont were preserved and available online.

Typical of the genre of Vermont Dutch jokes is this story printed in the Burlington Weekly Free Press of August 22, 1828. (It claims to be taken from a Schoharie NY newspapers).

A traveling salesman offers to sell some type for printing: a set of type to print anyone’s name and a little box of ink, all for six shillings.

A Dutchman agrees to the deal, and spells out his name: “Schimmelpennick Kinckvervanderspratcheratchern.”  (I think this is in the spirit of a combination of Diedrich Knickerbocker and Rumpelstiltkin”)

The Dutchman “cared more for the joke than the type, and more for grog than the both”! 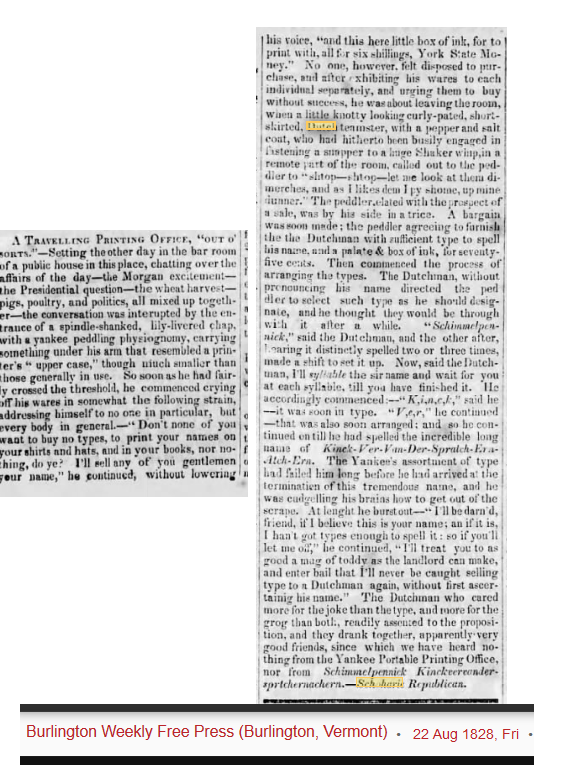