The North American Drought Index (http://drought.memphis.edu/NADA/Default.aspx) uses dendro-chronological data (tree-rings) to measure wet v. dry years over time and by region. The tool looks very impressive and I’ve only begun to figure out how it works.

Essentially, you can select a custom area of the map of North America and a date range and then ask for results.

Below is an example for the Hudson Valley in the period of New Netherland. 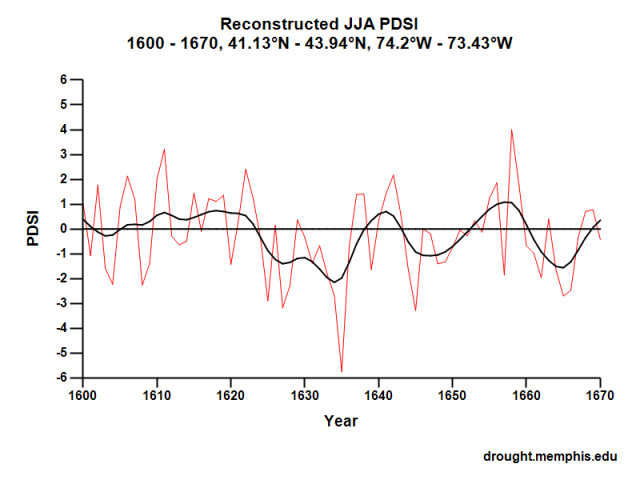 It looks like New Netherland obviously experienced a drought in the mid 1630s. I wonder if this corresponds with any violence in the area?

I also created one for West Michigan, roughly Ottawa County for the 19th century.  Here, we see quite a bit of variability. It looks like 1862 was a particularly wet year  (although this could be both rain and snow), and the mid to late 1870s were dry. The Dutch generally had wet years in the 1850s.

Drought Index for West Michigan in the 19th century

Certainly, I’m no expert on what this all means, but it is an interesting tool for historians, particularly environmental historians and historical geographers.  Check on the site, they also produce drought maps.